Love a cup of coffee in the morning? You might want to reconsider your choice of morning beverage.

Caffeine is a psychostimulant which means that it has mood enhancing and stimulant qualities.  You probably consume caffeine in the form of coffee or fizzy drinks with the aim of increasing your alertness and combatting fatigue, but it has negative effects too and may contribute to your anxiety.

Caffeine affects the chemicals in our brains in a number of different ways but of particular relevance to those with anxiety is that it inhibits a couple of hormones that contribute to how happy we feel.

First, caffeine blocks the calming neurotransmitter GABA which is essential for feeling relaxed.  Second, caffeine is linked to decreased serotonin levels.  Serotonin is important because it regulates anxiety, happiness and mood.

Caffeine stays in your system for a long time after you have consumed it and affects both the quantity and quality of your sleep. One study found that consuming caffeine 6 hours before bedtime reduced total sleep time by 1 hour.  This makes it difficult to get a good night’s sleep – which is important for mental health issues like anxiety.

3. Caffeine can cause panic attacks

You may be surprised to discover that caffeine is used to induce panic attacks for research purposes!

In one study, when participants with anxiety disorders were given 480 mg of caffeine, 61% of those with panic disorder experienced caffeine-induced panic attacks.

Caffeine increases the stress hormones: epinephrine and cortisol.  These hormones increase your heart rate and blood pressure as well as affect glucose levels.

Levels of cortisol after caffeine consumption are similar to those experienced during an acutely stressful situation.  In other words, when you drink coffee you are recreating stress conditions in your body.

Women cannot tolerate caffeine as well as men due to their hormones.

The length of time it takes to process caffeine is longer for women than men, particularly if on birth control pills or pregnant, which means that any negative side effects last longer.

Caffeine can also worsen any anxiety caused by premenstrual syndrome or the menopause.

How you can visualise the effect of caffeine

Still not convinced?  Then have a look at the results of this study which illustrates what happened to a spider when it was given caffeine.  You can see that the spider’s ability to spin a web deteriorated dramatically … it is almost as if it is a visual representation of anxiety: 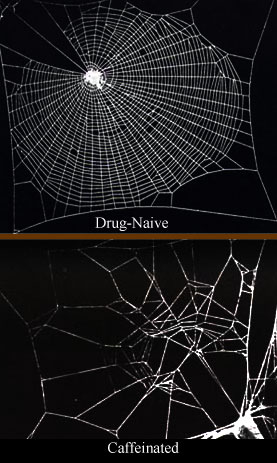 So, I’ve decided to quit caffeine

Given the negative effects of caffeine, I’ve chosen to quit coffee, black/green tea and chocolate (almost!) to see if it helps reduce my anxiety.

Having weaned myself off it slowly, the withdrawal symptoms haven’t been too bad.  Yet, rather oddly I am feeling slightly more anxious than usual today.  It turns out that caffeine withdrawal can cause anxiety… the good news is that it should only last a few days!

Would you quit caffeine to reduce your anxiety?

I’m on a mission to overcome my anxiety. By sharing my thoughts and experiences I hope to help a few others do the same.

Feeling anxious? Get in touch